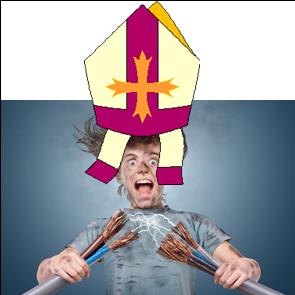 Bishops have been in the news this week in ways that could hardly be described as being a 'focus of unity'.

First of all there were the five Bishops in the House of Lords who defied the Government and (if reports are correct) public opinion to oppose plans for a £26,000 cap on Benefits.


Then blast from the past, retired Archbishop George Carey, waded in with an article for the Daily Mail which was a scathing attack on the hapless Bishops mentioned above.  In it he called into question their judgment, perspectives on morality and use of the Bible.  He also practically canonised  the relevant Government minister because he is a 'Committed Christian' - after all, God forbid that committed Christians should ever disagree!
Lord Carey has of course, every right as a member of the House of Lords, to contribute to the debate in the House of Lords - but he did not.  He chose instead to make his contribution in the pages of the Daily Mail giving them the front page headline "Halleluiah!  Archbishop blasts clerics who oppose welfare reform!"  Nicely done Archbishop!


But the most shocking statement by a Bishop was brought to my attention by another Bishop who tweeted it with disbelief!  And shocking it was...
It was the observation that Bishop Wallace Benn (current Bishop of Lewes) has endorsed a book by Christian Voice fundamentalist Stephen Green.


The book "Britain in Sin" charts 57 pieces of legislation which the Queen has signed which are bringing God's judgment on Britain because they oppose the clear teaching of scripture.  Such unbiblical legislation includes recognition of marital rape, equal pay for women, the United Nations Charter, and the European Convention on Human Rights.
Coincidentally, another piece of legislation which Stephen Green describes as unbiblical is the creation of state social security.  Apparently, it goes against God's law because it "penalises thrift and marriage and rewards fecklessness and isolation." (page 9 of the pdf download of the book).  Disturbingly, Lord Carey also uses a similar phrase in his article for the Daily Mail stating that the welfare state, "traps people into dependency and rewards fecklessness and irresponsibility."


So why is the 'focus of unity ' issue so important that it is being used to deny celibate gay clergy in Civil Partnerships from becoming Bishops ?
It is hard to imagine that Bishop Wallace Benn's endorsement of 'Britain in Sin' will be enable him to be a 'focus of unity' in the diocese where he serves, anymore that we can pretend that the Bishops in the Lords are at one with Lord Carey.


Our Bishops can be pro-government or anti-government.  They can be pro-women's ministry or anti-women's ministry.  They can even endorse books which would outrage the vast majority of Christians and society at large - but they can't be openly gay - even if they promise to abide by the churches repressive teachings.
Shocking - Bishops!

Update:
Since I wrote this blog I am pleased to hear that Bishop Wallace Benn has dissassociated himself from Stephen Green's book in a statment which implies that he didn't read it fully before endorsing it! See http://www.ekklesia.co.uk/node/16147

While this is clearly welcome it is still shocking that he should have thought he could endorse the book at all.  It makes me wonder which parts had he read and could endorse!

Racism, prejudice and me...

Recent events have driven racism back to the top of the news agenda once again. 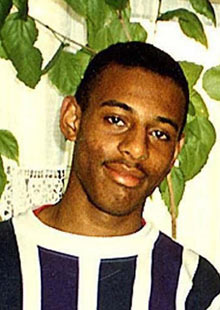 The conviction of 2 of Stephen Lawrence's racist murderers has attracted most attention, but alongside it, football has seen a flurry of activity with 2 men arrested this week for racially abusing players on the pitch and via Twitter.


Nor are politicians immune with Diane Abbott MP (Britain's first black woman MP) forced to apologise last week after tweeting that "White people love playing divide and rule".
The truth is that while stories such as these hit the headlines, there is some prejudice in all of us, however hard we may try to hide it.  Like alcoholism and drug addiction, owning up to it is actually the first step to addressing it.

I was a curate not far from the spot where Stephen Lawrence was brutally murdered in 1993.  Stephen was still a sixth form student at Blackheath Bluecoats School where I was also a year chaplain.  He had been in school on the day he was murdered, and I saw at first hand the effect that his senseless death had on the students there, black and white.


I was also a member of the Police Community Consultative Group for the area and saw well-meaning senior police officers undermined by the institutional racism which was identified in the Macpherson report five years later.  Such institutional racism had allowed some of the officers attending the murder scene to dismiss it as just another case of black gang violence, and led to accusations that the detectives who initially investigated the murder were less than committed in their actions to bring the murderers to justice.
As such I am deeply relieved that Doreen and Neville Lawrence have finally seen some justice after all these years.  Their dignity, commitment and forbearance is beyond words when we consider that for the last 18 years, they and everyone else who lived in the area have known exactly who murdered their son.


But I also remember an occasion when I found myself caught out, and my own prejudices were exposed despite my commitment to opposing racism.
Around the time of Stephen's murder, our clergy chapter welcomed two speakers from a race awareness team to talk to us about racism.  Both our guest speakers were black and as we sat there, one of them  told us what had happened to his son after being arrested by police in Tottenham some years before.


On learning from a friend that his son had been arrested on some very minor and dubious charge, he went to the police station where he knew his son was being held.  He asked for information and was given none.  He persisted and was finally told that yes, his son was there.   Over the next 18 hours, he then sat at the police station, while all the rights and procedures  his son was entitled to were denied him.
Finally in the early hours of the next day, the father went once more to the desk sergeant and said "As a magistrate, I hope that you won't be bringing my son before me in court in the morning - because if you do, I will have no option but to point out all the ways in which you have denied him his rights and call you to account."


The effect was almost instantaneous and his son was released without charge, but the effect of the story on me was equally profound.
You see - when this quietly spoken, middle aged Jamaican man was speaking, it had never occurred to me that he could be a magistrate!  My experience of meeting magistrates up until then had been exclusively white, and deep down a part of me was shocked (as the police clearly were when he revealed his identity) to learn that he was a magistrate!  A part of me had seen this man in a way which displayed "processes, attitudes, and behaviour, which amount to discrimination through unwitting prejudice, ignorance, thoughtlessness, and racist stereotyping, which disadvantages minority ethnic people"  (quoted from the definition of Institutional Racism in the Macpherson Report).


And prejudice is what prejudice does...
So as racism tops the news agenda once again, it would do us no harm to examine our own hearts and minds.  Prejudice is not just found in football grounds and on the streets - it is there in our hearts, homes and pews - anywhere where we prejudge people because of their colour, culture, gender, sexuality, politics or disability.


In recent years, racial prejudice in the Church has been widely addressed (although there is still a long way to go) but prejudice based on gender or sexuality has been allowed to continue unabated.  Until we face up to our prejudices, whatever they may be, we will continue to fall short of the command of God to love our neighbour as ourselves.
Posted by Benny Hazlehurst at 11:20 6 comments: Links to this post

It is always a source of great irony to me that working towards a truly inclusive Church seems to produce so much conflict. Sometimes that conflict is subtle and well mannered, sometimes not.
Just before Christmas I received a Facebook friend request from someone I hadn’t seen sinceI was a curate. He was a member of the congregation where I served, and I remember assisting at his wedding.

When I looked at my Facebook page, I also noticed that he had commented on one of my blog posts– he said,

‘I don’t understand this – the word of God is explicit about sexual immorality including homosexuality… on judgment day, those who promote homosexuality and encourage others whilst claiming to be“Christian” will find out the truth of things when God rejects them saying, “I never knew you” and then sent to Hell.’
I guess that is me done for then! As I accepted his ‘friend request’ I couldn’t help thinking ‘with friends like these ...!’

But reading the Epiphany Bible readings today, I am reminded that whenever God has spoken into the world it seems to have produced conflict.

It was true for Moses and the people of Israel enslaved in Egypt. It was true as God led Israel into the promised land. It was true in the ministries of the prophets, from Samuel through Elijah, to Jeremiah, Ezekiel and Amos.

It was true for the leaders of the Protestant Reformation, as they challenged the status quo, and for Roman Catholics like Archbishop Oscar Romero, murdered at the altar for speaking up for the poor in El Salvador. It is true today in many countries around the world where Christians and those of other minority religions are often persecuted for their faith.

And it is true in the Church’s struggle with sexuality.

It seems that whenever God is at work - there is conflict.   If this was the result when Jesus appeared ‘full of grace and truth’, how can it be any different now?


But that does not mean we should look for conflict or arm ourselves to win by force. The Christian way is not one of powerful victory, but of faithful witness, prayer and love - even in the face of visceral confrontation.
When faced with conflict, we must hold out arms of love rather than point fingers of condemnation; we must challenge the anger and fear of closed hearts and minds while planting the seeds of reconciliation and forgiveness; we must seek to see Christ in those with whom we disagree rather than seek to simply rebrand them with our version of God’s image.


So my prayer for 2012 will be the one from Celtic Daily Prayer, based on the Breastplate of St Patrick. It recognises both the inevitable conflict that seeking to follow Christ brings, while looking for Christ in all those we meet along the way.

(Cartoon from http://www.savagechickens.com/)
Posted by Benny Hazlehurst at 10:26 6 comments: Links to this post