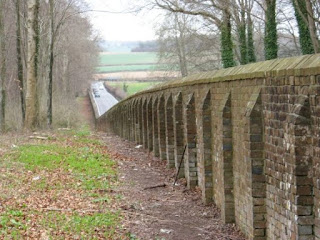 There is a wall in Dorset I particularly hate.  It runs for 3 miles along the A31 in Dorset between the road and the Drax Estate.  In a county famous for its natural hedgerows which support diverse wildlife, living and breathing with the seasons, it sticks out like a harsh impenetrable sore thumb screaming “Get orf my laaand!”.  As you drive alongside, it just goes on and on, punctuated only by large imposing gate arches towering above with huge sculptures of stags and lions – stone sentinels to deter the misguided traveller.

It was built in 1841 by John Samuel Wanley Sawbridge Drax (nicknamed ‘The wicked squire’) as an exercise in power and economics.  It took the road from Wimborne to Dorchester away from their vast stately home in Charborough with its 28 square kilometre estate.   It was built to keep the riff-raff out, and to make money out of them in the process, forcing ordinary people pay for the privilege of making a journey which they had previously been able to travel for free. 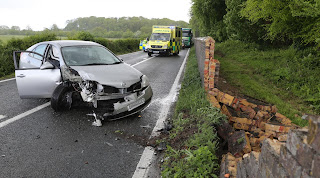 Unfortunately for the Drax family, the wall never paid for itself.  The opening of the Wimborne to Dorchester railway bypassed the need for many to use his toll road.  Today it stands with its 2 million bricks as a monument to his greed.  It constantly needs repair as holes appear, sometimes through age and sometimes when mesmerised drivers crash their cars into it when driving carelessly around its sharp bends.  In the words of descendant and current MP for South Dorset, Richard Drax, their bricklayer’s job is assured.

Such walls are built as impositions of power.  The powerful build walls to impose their will on the powerless – usually when the masses won’t do as they are told.

The Berlin Wall is one of the most striking examples in recent history and in its cold inhumanity.   Alarmed by the 3.5 million Germans who used Berlin to escape to the West after the Second World War, the East German Government began construction of its “Anti-Fascist Protective Wall” in 1961. The haemorrhage of defectors largely stopped but at the human cost of up to 200 lives from among the 5,000 who tried to cross, killed by mines and gunfire from its 302 watchtowers.  It was this week 27 years ago that the East German Government finally admitted its failure allowing visitors across for the first time. 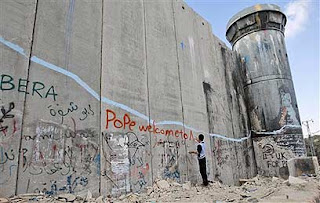 The West Bank Barrier in the Holy Land is a present day wall which keeps people apart, and imposes the will of the powerful at the expense of the powerless.  Palestinians along its 420 mile length have had their lands confiscated to make way for the barrier.  It has been built to protect Israel from the threat of suicide bombers and terrorist attacks, but it has also separated families from one another, impeded access to medical care, and made life more and more difficult for Palestinians who live and work on the different sides of its concrete panels and razor wire fences. 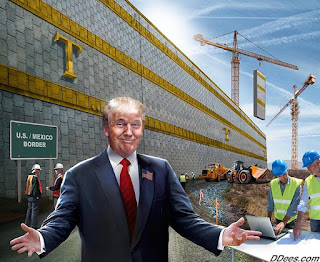 Now, the President elect of the USA, Donald Trump has promised to build a wall to keep Mexicans out of the USA. At 1,900 miles this will dwarf the “Anti-Fascist” Berlin Wall and the West Bank Barrier.  It will cost up to $25 billion dollars and according to Trump, the Mexicans will pay.  Like the Drax Estate Wall in Dorset, this is yet another example of the rich and powerful making the poor and powerless pay for something their neither want nor need.  Then there is the cost of maintaining it and patrolling it– will the Mexicans have to pay for that too?  The economic costs will be astronomical and ultimately futile.  Like John Samuel Wanley Sawbridge Drax, Donald Trump will find that the cost making good his political promise will far outweigh any economic benefit.  If he builds it, he will find that it is as useless in protecting American interests as the Great Wall of China was in protecting successive Chinese Dynasties from foreign invaders.

Ultimately it is all folly.  Great walls are built by those who think of themselves as superior to ordinary people who live with the consequences.  Donald Trump is certainly one of those people who intends to make a name for himself.  Being elected President of the United States will do nothing to assuage this desire.  He now needs a legacy which will make people remember, giving him a kind of immortality.  Sadly, his narcissistic tendencies will only get worse.

John Samuel Wanley Sawbridge Drax thought in exactly the same way.  To cement his legacy, he had a huge mausoleum built in advance of his death to be his final resting place. It dwarfed the parish church which it was built beside. He rehearsed his funeral several times before his death with his estate workers carrying his coffin.  Perhaps most bizarre, the mausoleum door was complete with a letter box for The Times newspaper to be delivered daily.  He clearly had ideas of immortality which went beyond those of the masses.

In a beautiful irony, however, the financial failure of the Wall meant there was no money to pay for the mausoleum’s upkeep, and over the years which followed, it fell into disrepair and was eventually demolished by his own descendants.  If only the wall had gone the same way.

All such walls go the same way eventually, as do the people who build them.  They all end in ruin.  The only ones who benefit are the contractors who build them. I wonder if Trump Enterprises will be investing more in concrete and construction over the next few years?