Christians reach out while the Church pulls away... 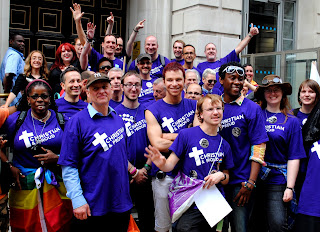 At London Pride last weekend around 120 Christians dressed in purple T-shirts emblazoned with the words "Christian and Proud", marched in the London Pride Parade.


They sang Christian songs and gave out gospel leaflets to onlookers.  They smiled and waved as they were greeted with cheers and applause by the crowds who had gathered to watch.  It was profoundly moving to see this expression of the Christian faith welcomed by people of all faiths and none.  It was an act of mission declaring God's love to gay and straight alike on the streets of central London.
But as 'Christians at Pride' reached out, the Church of England was pulling away from the gay community, by introducing a new way of excluding gay clergy from being considered as Bishops.


In an statement from the House of Bishops, the Bishop of Norwich said,  "clergy in civil partnerships should not, at present, be nominated for Episcopal appointment".  This now appears to be the official policy of the Church of England, pending new reviews of same-sex relationships which will take place over the next few years.
This will certainly make for a quieter life in the Crown Nominations Commission, as recent revelations have shown, as it will exclude candidates like Jeffrey John without any need for discussion.  But what kind of message is it sending to gay Christians?


Clergy in Civil Partnerships already have to make a declaration that their relationship is non-sexual and that they will abide by the teaching and discipline of the Church.  As such there was nothing to prevent them being considered for other appointments - until last weekend.
To quote one of the organisers of 'Christians at  Pride', himself an evangelical gay Anglican, "This poses an interesting question for the church. What does a gay person have to do in order to be acceptable to the church?  For years, we have been told that it's really just the sexual act which is the problem, and now it turns out its more than that."


It is tempting to ask where Jesus would have been last weekend, if he had to choose.  Would he have been standing alongside the House of Bishops, or among the Christians at Pride?
The Gospel writers would seem to leave us in no doubt.  Jesus almost always chose to spend his time with those outside the religious institutions.  Whether on the shores of lake Galilee, or with tax collectors and sinners, Jesus spent little of his time in the corridors of religious power.  And when he did venture into the places of religious power, they were often as uncomfortable with him, as he was with them.


The two reviews which the Bishops announced last weekend do, perhaps, provide a glimmer of hope.  They may provide the opportunity for the Church of England to reconsider its attitude to same-sex relationships after several years of stalemate where concerns in the rest of the Anglican Communion have prevented a return to this thorny issue.
It is intended that these reviews should build on the 'listening process' which was begun in 1998, but has faltered in recent years.  LGB&T Christians will be hoping that as well as listening to them, the church will listen to the Jesus who still reaches out to them, even when the church pulls away.
Posted by Benny Hazlehurst at 09:27 3 comments: