I Believe in Marriage 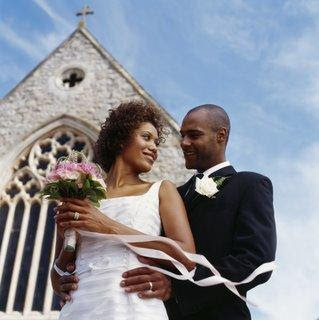 Marriage has never been so topical in the UK media as it is now.


Government proposals on same-sex marriage has driven marriage to the top of the religious agenda with campaigns and counter-campaigns springing up left, right, and centre in the battle over the ‘definition’ of marriage.  From the accusations which have been levied against the proposals - that redefining marriage will destroy it - you would think that our current definition must be some sort of magic wand for family happiness, and that any tampering would rob it of it s power.
The truth, of course, is nothing of the kind.  It is arguable that the greatest threat to marriage comes not from any proposed re-definition, but from the way in which it is treated by the ‘heterosexual community’.  Indeed it is not difficult to find same-sex couples who say they wouldn’t want to marry even if it were possible, because their observations of marriage have led them to conclude that it is a bankrupt institution.


But I believe in marriage.
I believe in it from personal experience – my wife and I have been married for over 20 years, and that relationship has been the bedrock of our family life through some very difficult times.  It has brought us joy and fulfilment, and I can honestly say that I am more in love with my wife today than the day we married.


I believe in it for theological reasons – because when I read the Bible, I see God recognising our need for the ‘other’ who enables us to be more complete.  ‘It is not good for the man to be alone’ says God about Adam in the Garden of Eden.
I believe in marriage from the experience of marrying people who have come to churches where I have ministered – because of the hope, joy and excitement which I see in their eyes, and the way we have talked as I have helped to prepare them for married life.


But that does not make Marriage a magic wand which, once waved over a love-struck couple, will cement them together in wedded bliss for the rest of their lives.  As a friend of mine said recently, ‘marriage is a process not a destination’.
Which is why I am very interested in a new marriage campaign which has been launched by a High Court Judge in family law with over 30 years’ experience of dealing with marriages which have gone wrong and ended up in the courts.


The aim of The Marriage Foundation is ‘to be a national champion (advocate) for marriage, strengthening the institution for the benefit of children, adults and society as a whole.’
Certainly marriage is in desperate need of being strengthened.


When I have talked with 13 year olds in schools about their attitudes to marriage, a bewildering array of opinions and experiences have emerged - some positive, but many sadly cynical at such a young age.
When I have talked to couples wanting to get married in church and explained that I would want to meet them a number of times before their wedding to talk with them about the vows they are planning to take and about how to make their marriage life-giving and life-long, most have been initially surprised  but then very appreciative.  ‘Everyone else is just focused on the wedding day’ they tell me, and they value the chance to talk about the much more important issue – the rest of their lives together.


When we talk about the difference between ‘I do’ (on film and TV) and ‘I will’ (in the marriage service) or about areas which make or break a marriage (like money, sex, and power) I see light-bulbs starting to light up in their minds.  When I take them though the vows they are going to make to each other ‘for better, for worse, for richer, for poorer, in sickness and in health’ and ask them “Are you sure you are ready to make these promises?” many say to me that they had never even read the vows before, let alone think about whether they were ready to make such life-defining promises to the other.
It is ironic that most people would study the details of a mortgage contract with far more care than their marriage vows – yet which is more important and far reaching?


Good preparation for marriage is not a magic wand either, and I know of some couples I have married where the marriage has still ended in divorce – but at least it ensures that they set off heading in the right direction.
Which brings me to my last statement of faith today – I believe in church marriage.


I say this because I believe that getting married in church provides the opportunity for the best possible start to married life.  That is not because of the richness of the ceremony, or the religious setting or even the prayers – but because the vows that are made in parish churches spell out the commitment which is involved in marriage far beyond those of civil ceremonies and I know that many of my colleagues in parish ministry take the trouble to help prepare couples for their married life in a way which is simply not available anywhere else.
Marriage is not an outdated bankrupt institution – neither is it simply a piece of paper – it is a living bond between two people which has the capacity to be life-giving and life-long.  When it achieves this potential, it enriches both family life and society as a whole.


I believe in marriage.
Posted by Benny Hazlehurst at 07:00 2 comments: