Too Young to Vote? 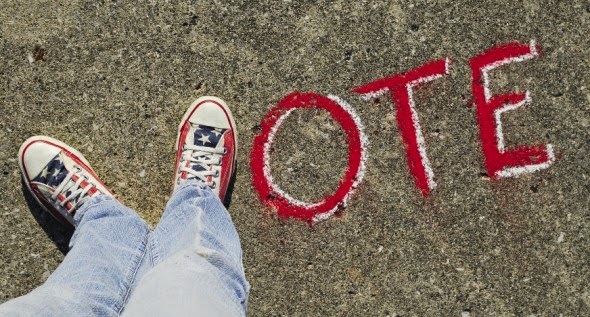 As the General Election Campaign continues, there has been a rather noticeable auction of promises for pensioners and older people.

All the main parties appear committed to the ‘Triple lock’ which ensures that the state pension will continue to rise at or above increases in earnings and inflation.  The Conservatives are promising to retain all universal benefits for pensioners, while Gordon Brown has been promising Scots the power to ‘top up’ pensions and benefits north of the border.

But where are the promises for young people?

Just as conspicuous as the promises to pensioners, is the lack of positive commitments to young people.  Yes - there have been commitments to provide more apprenticeships, but they is more about up-skilling for economic growth than about attracting the younger person.  Apart from the Labour pledge on University Tuition Fees, young people seem to be in line for more stick and less carrot when it comes to benefits and finding work.

So why is this? 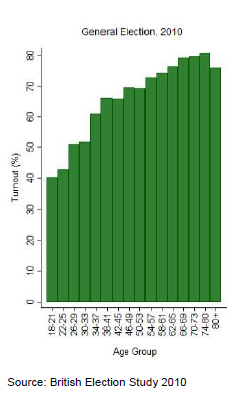 The reason, of course is rather obvious.  Older people vote!  The ‘grey vote’ is vital to winning seats all over the country, and our political parties are clamouring for their backing.

Young people on the other hand tend not to vote.  18-25 year olds are the least likely group to vote in our country based on figures from the last General Election in 2010.  If you are under 18 years old, you can’t vote, and if you are 18-21 you are half as likely to vote as someone aged 74-80 despite the reduced mobility of many in the older age group.    Put simply, the older you are, the more likely you are to vote - and the more attention you will get from the politicians vying for your support.

As a House of Commons briefing paper on Election Turnout from 2013 states:

“The decline in young people’s engagement in politics has been a common theme of late… in the context of falling overall turnout at General Elections, the decline has been sharpest amongst voters aged 18-24.”

The situation is also being made worse this year by the introduction of new procedures for registering to vote in this year’s General Election, with the result that the number of 18 year olds registered has crashed by almost 50% in the last 12 months.

For political parties the bottom line is about winning, so they are not going to waste their precious resources on lost causes – and where elections are concerned young people are a lost cause.

So why don’t young people vote?

Perhaps it’s apathy?  Perhaps they don’t trust politics?  That they are too busy drinking in bars to bother about who runs the country?  Or is it that they feel disconnected from election campaigns run by older people for older people, with little apparent relevance for their lives?

The disenfranchisement of a generation will lessen our democratic processes both in the present and for the future.  People who don’t think their vote matters in their teens and twenty’s, are increasingly likely to think exactly the same in their 30’s, 40’s 50’s and 60’s – and then who will the politicians be able to appeal to when this generation become pensioners?

But perhaps the recent Scottish referendum might provide a way forward.

In a bold move, 16 year olds were given the vote for the first time.  The effect was dramatic. Suddenly young people were engaged in the democratic process as never before.  Seasoned politicians found themselves having to learn how to address the aspirations of the young as well as the old.  By referendum day 89% of 16 & 17 year olds had registered to vote and overall turnout in the referendum was the highest in modern British election history at 85.4%.

So what if we reduced the voting age throughout the UK?

Reducing the voting age to 16 would rejuvenate our tired political processes. 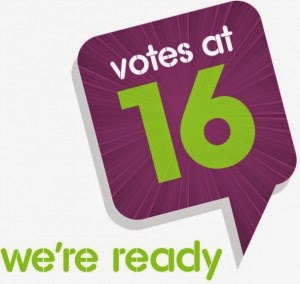 Citizenship classes in school would take on real and present meaning by preparing the majority of students to register and  vote for the first time in local elections before finishing their GCSE’s.
Continuing citizenship education in 6th Form and Colleges would mean that the majority of 16-18 year olds would have the opportunity to vote in a General Election or European Election before leaving compulsory education.

This process of re-franchising would be further assisted by situating Polling Stations in 6th Forms and Colleges (while not closing the school or college for the day).  Students could then vote during the day at their place of education and the younger generation would be placed at the heart of our democracy.

Political parties would find themselves having to take young people seriously – to find ways of communicating – to identify policies which would speak to a new generation instead of ignoring them or scapegoating them.

The idea is not new of course.  MPs, Lords and political parties have pursued the idea several times.  No less than 5 Private Members Motions and 3 debates have been introduced in Parliament in the last 15 years calling for such a change, but each has failed to change the goal-posts despite the most recent debate securing a vote of 119 MPs in favour to 46 against.  The Lib Dems included it in their 2010 manifesto, but it failed to make the Coalition agreement after the election. Today - Labour, the Lib Dems, the SNP, Plaid Cymru and the Greens have all made it an election pledge for 2015 but the Conservatives oppose any change.

The longer we delay the greater the democratic deficit that will need to be addressed.  It was Eddie Cochran who first put the issue into song in ‘Summertime Blues’ back in 1958 when he wrote the lyric,

‘Well I called my congressman and he said "Whoa!”
"I'd like to help you son but you're too young to vote"’

We need to resolve this quickly before another generation passes into political apathy.
Posted by Benny Hazlehurst at 07:30 1 comment: