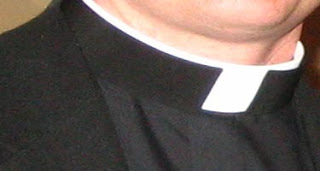 When I wrote my blog on Saturday - I'm not aginst religious people - just religion - I hadn't read the full interview in with the Archbishop of Canterbury which appeared in The Times that day.

Having now read it, I am saddened at yet another expression of the same phenomena that I described that day. Once again the Church of England through the voice of its Archbishop has said "I'm not against homosexual people - just homosexuality".

In his apparently open minded comments on the suitability (or not) of homosexuals to be priests and bishops, he has once again treated their sexuality as optional 'add-on' to life by insisting that while he would have 'no problem' with a celibate gay bishop, he regards the issue of homosexual relationships as 'a particular choice of life'.

Leaving aside the obvious question as to why, if he has no problem with a gay bishop who is celibate, he has prevented the appointment of Jeffrey John as a bishop twice (the most recent being this summer) - there is a deeper issue. That of the forced celibacy of homosexual clergy.

To treat gay clergy in this way dehumanises them. It requires them to take on a burden which most do not feel called to, and to live in a manner of self denial which is unsustainable.

When God created Eve in Genesis 2, the purpose expressed was not that of procreation (as some would have us believe) but of mutual love and companionship. In this story of creation, "No suitable helper could be found" (vs 20) and so God created Eve out of Adam to be 'bone of my bone, flesh of my flesh' - to be the one who completes Adam and brings the wells of human love and fulfilment to a lonely Adam.

This sense of needing to have that special someone who completes us is at the heart of our human desire for mutual love. It is something which is common to all humanity, gay or straight. So to say to a homosexual person that because their attraction is to someone of the same sex, they should set aside this fundamental part of their humanity, is both damaging and wrong. We simply can't split ourselves in two like that and expect everything to be fine.

I witnessed this at first hand in a fellow student at Theological College who simply could not bear this burden imposed by his church - and it ultimately cost him his life. See Benny's Tale - Part 2

The approach which says 'I'm not against homosexual people - just homosexuality' simply does not cut it - ethically, morally, or theologically.

I am reminded of a powerful speech made by an elderly nun at General Synod in 2004. (Yes - good things appear in the most unlikely places sometimes!)

Sister Rosemary CHN, representing Religious Communities, spoke in the debate on Human Sexuality, and her theme was celibacy - something she knew a great deal about. She began by celebrating her vocation to the celibate life...


"I speak in this debate from the perspective of a vowed celibate life in the monastic tradition. For me, this life, freely chosen in response to the call of God is, at the deepest level, a way that brings blessing, joy and fulfilment... I would therefore strongly defend both vowed celibacy and singleness as valued ways of being human, reflecting the love of God and growing into the likeness of Christ"

before letting loose this thundering condemnation of the kind of forced celibacy the Archbishop is demanding for gay and lesbian clergy...

I leave you with her words which expose the bankrupt reality of the Archbishop's words this week.


"Some gay clergy have reluctantly accepted celibacy as an imposed discipline. Some of these, I feel sure, have found that through their struggles they have been given grace... For others, however, misery remains just misery, and they are exposed to the danger of a kind of withering of the heart, which makes them less able to love anybody."

"Christians who are happily married can bear witness to the way in which a partner's love can be both a means of grace and a school of the Lord's service: a channel of God's love to them and through them. Gay Christians in committed relationships say that it is the same for them. When I observe the quality of their lives, and feel warmed and healed by their friendship, I know that it is true."

"A lay member of the Church in which I used to be a curate, when interviewed by a local newspaper about Gene Robinson's consecration, said 'When God calls a man, God calls all of him, including his sexuality'... Is it not more than time for us to open our eyes to what God is doing in our gay brothers and sisters? To find humility to learn from them? To repent of the cruel way the Church has treated them and is treating them, and to join with God in loving and valuing them for all that they are?"

During the recent Pope's visit to the UK, I found myself listening to an radio interview with someone who was protesting against it. The interviewer asked the protester if she was an 'aggressive secularist'.

The protester replied enthusiastically, "Yes! 100% ...!" then thought about her answer a little more and added. "I'm not against religious people - just religion!"

I found myself quite affronted by this .

The protester meant well by it, wanting to reassure the audience that she didn't mean to be aggressive towards religious people, but what came over to me was offensive because it underestimated the place of my Christian faith in my life.

The reality is, that my faith isn't an 'add on' to the rest of my life - something which can be put on or taken off at will to suit the situation. It is an indispensable part of me, right top the core of my being!. I have put my trust in Jesus Christ and committed my life to following him. As a result I believe that I have been 'born again' into a new life which will carry me through to eternity, and my life now is inextricably linked to my faith. It is an indelible part of who I am.

So the comment that this lady was not against religious people - just religion - was actually deeply offensive to me. Me and my religion are inextricably intertwined, and can't be simply separated off like that!

But then I began thinking about where this kind of distinction might come from ...

Because we, as the church, have championed this kind of false distinction. 'Good' Christian people have told women for many years that they are not against women - just women's ministry as priests (or now as bishops). We have told Gay, Lesbian and Bisexual Christians that we are not against homosexual people - just homosexuality! We have rolled out the exact same phrase to justify our prejudice, imagining that it will make it acceptable, and failed to see that in doing so we have been trying to separate and devalue a fundamental part of their human identity and humanity.

A homosexual cannot set aside his or her sexuality like taking off coat to suit the situation, just as I cannot set aside my faith in order to become acceptable to others. A woman cannot suddenly cease to be a woman and say "Oh, that's ok then" when someone excludes her from ministry simply because of her gender.

Jesus said "You shall reap what you sow" and how true that is. I may be offended by the suggestion that my faith is an optional add-on to my life, but that is what we (the Church) are still telling people about our their gender or sexuality. So it is perhaps not surprising that we get a taste of our own medicine from time to time.

The most effective counter to this 'aggressive secularist' would, of course, be to stop making that false distinction ourselves - to accept women as equally human as men - to accept sexuality (of whatever orientation) as part of our humanity rather than something which has to be re-directed, controlled by denial, or healed.

I hope that we will get to this point one day, because until we do, we will continue to do what that secularist lady did - to devalue things that are more than what we do or say - they are a part of who we are - to the glory of God our creator and redeemer.

On a lighter note - I love the message of this song and video by Francesca Battistelli, and it fits with the sentiment of this posting. Go to: http://www.youtube.com/watch?v=EKSQjSdU8VA to watch the video.

Letting the light into our crowded lives 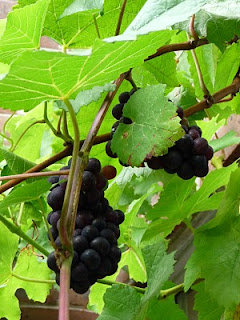 I have just finished cutting back the vines which grow either side of the patio at the vicarage.

Before you write to tell me – yes, I know that this is not the time of year to be pruning vines — but when we returned to the Puddletown at the end of my sabbatical, I discovered that they had grown so much while we were away, that we could no longer see out of the dining room windows.

Normally I train them as they grow, but left un trained and untrimmed they had simply taken over. Growing in all directions, filling every space, I couldn't help seeing a metaphor for our crowded lives.

Left to their own devices, our lives can often fill up with different tasks and responsibilities. The danger is that, unchecked, and untrained, we simply fill our lives over and over again, layer upon layer, until there is no space left. This is often made worse in our churches by the mantra, often repeated, "If you want something done, ask a busy person!"

In John's gospel, Jesus compared us to the branches of a vine and described God as the gardener who prunes the branches so that they might bear fruit. (John 15)

I wonder, however, how willing we are to allow God to prune our busy lives. Too often we have a tendency to want to hold on to the things we do. We are more likely to try to add something new rather than let go of one thing in order to do something else. The result is increasingly pressured and frenetic activity as we try to cover all the bases.

I wonder what would happen if we were to let have God free reign to prune where he wishes, training and directing our lives as he would want.

One thing I am sure of — that our lives would be less crowded and more fruitful as a result!

Having cut back our vines at the vicarage, I can now see out of our windows, and the light from outside now illuminates the inside of our dining room. It feels a lot less claustrophobic in there as the light streams in. I wonder how many of us would find the same if we would allow God to have his way.

Posted by Benny Hazlehurst at 09:10 2 comments: