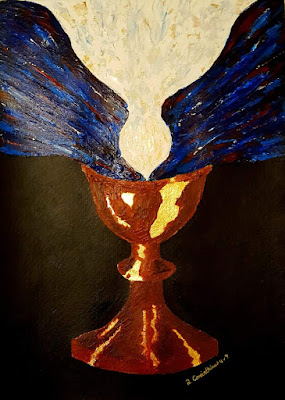 I have just agreed my retirement date with the Church of England.  It will be the 30th November.

This is not because I have reached retirement age of course.  I have been granted ill-health retirement as a result of my cancer.  Having been unable to work since I was in hospital in August and seeing no prospect of returning in any meaningful way, I put in my application for retirement soon afterwards.   My early retirement will also allow the Diocese to begin looking for my successor so all in all, it is the best solution.

But it leaves me with an uneasy feeling deep in my bowels as intertwining strands of relief and sadness weave their way through my body and soul.

When I was first diagnosed, I decided that I would keep working for as long as possible.  “What else would I do?” was a phrase which I often used when asked, and I profoundly disliked the idea of just sitting at home waiting to die.  “I’m not giving up yet” was another mantra I employed which begs the question “Am I giving up now?”

From my diagnosis in August 2017, I continued to work full time until I started chemotherapy in the Autumn.  Even then I just took two days off around each chemo infusion and worked from home when I was most prone to infection.  It was still pretty full on.

As time went on though, things started to get more difficult.

Towards the end of my 5 months of chemotherapy, I found that I wasn’t recovering as quickly after each cycle and began working 10am-4pm each day.  A little later this had to reduce further to working Monday, Wednesday and Friday, allowing me days in between to rest and recover.  The one hour drive to and from the office also started to take its toll.

Then I began to notice that God was giving me hints.

The first came in February this year.  I was due to see me oncologist for results of a CT scan.  The results would show how successful my treatment had been so far.  Before we set off for the hospital, I settled down to my morning prayers with the appointment very much in mind.  When I got to the gospel reading in Celtic Daily Prayer, I found it was a single verse.

“Lord you now let your servant depart in peace, according to your word, for my eyes have seen your salvation.” (Luke2:29)

These were the words spoken by the old prophet Simeon when he saw the baby Jesus and knew that God’s promise to him had been fulfilled.  Now he was ready to die in peace.

I was taken aback. What did this mean?  What was I about to be told?

At the appointment I found that the scan results were mixed.  Some mets (tumours) had shrunk, some had grown and there were some new ones.  It wasn’t what my oncologist had hoped for but it wasn’t disastrous.  I knew it didn’t signal the end in my fight with cancer, so what was God trying to tell me?  Was there something else which was coming to an end?

The second hint was less subtle.  In July, I was on my way to celebrate Communion with a group of young people who were spending a year in the diocese exploring vocation.  It was always a joy to meet with them and a privilege to celebrate Communion, yet while driving there I felt so tired.  I prayed, “Lord, please, if you want me to keep working, I need some energy!”

At the end of Communion, I packed my communion set away as usual and set off for home, still feeling dreadfully tired.  At home I got the pottery pattern and chalice out to clean them properly only to find the chalice in pieces.  I had stored and carried it in the same way for years without any incident and yet somehow, this time, it had been broken.

As I held its broken pieces in my hands I felt immediately overwhelmed.  I knew what God was saying.  Central to the ministry of any priest is the celebration of Holy Communion.  It was time to let go.

Being a good Charismatic Evangelical however, I knew that I should never rush into anything, but wait for a third and final confirmation of this word to me.  I talked with my spiritual director and we agreed that I would wait to see what my oncologist said when we next met.

I didn’t have to wait long.  In August I was unexpectedly admitted to hospital feeling very poorly.  After yet another scan, my oncologist appeared at the bottom of my bed with the news that the treatment was not keeping pace with the development of my cancer.  Things would only get harder from now on.  I knew the time had come to set work aside.

Looking back, I had been preparing for it at work.  Over the last 12 months, I had been working to make my role more sustainable without me; putting together teams of people who could carry on the important work of identifying and encouraging people who God is calling to Christian ministry.  Some areas were now strong enough and ready, but others were not.  Couldn’t I have had a just few more months, to future-proof everything?

As I reflected on this, I have realised that it would always have felt this way.  It would never have felt that I had done enough so the feeling is irrelevant.  ““Lord you now let your servant depart in peace” is all I have to rely on, that God feels I have done enough.

And yet the sadness remains.  In the end it all feels very sudden.  I first felt God’s call to ordained ministry over 40 years ago when I was just 14 and being obedient to that call has been at the very centre of everything for me, and subsequently for myself, my wife, & family, ever since.  Now, suddenly, it is over. 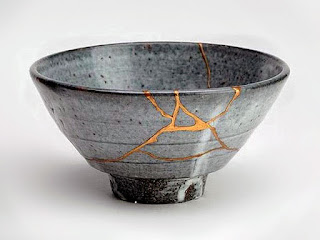 After I found my broken chalice, my wife Mel suggested we repair it and told me about the Japanese art of Kintsugi where broken pottery is repaired using lacquer infused with gold, making the result much more beautiful and, indeed valuable.  I wasn’t in a place where I could hear this at the time.  The broken pieces went into the bin

I regret that now and wish I had listened to her (how many times do husbands say that?!)  God is in the business of binding up the broken after all, and bringing beauty out of brokenness.  I was too hasty with my chalice, perhaps because the truth its broken pieces revealed to me was too uncomfortable to accept at that time.

But then in September, one of my friends shared on Facebook a piece of art which she had created.  Leila entitled it “Broken Vessels”.  I cannot guess at what she saw in her each element of her painting, but I know how it spoke to me.

The lines of gold in the chalice speak to me of a broken vessel restored in that ancient Japanese tradition.  Each one showing an element of brokenness and yet also celebrated and valued as the cup returns to useful service.  The dove is the Holy Spirit still descending on this broken cup with God’s blessing and anointing.  The blue lines around the dove’s head speak to me to the waters of life still flowing into the chalice, or flowing out to the world around it.

Perhaps God isn’t finished with me yet.

The Bible verse quoted in the painting reminds us that “We have this treasure in jars of clay to show that this all-surpassing power is from God and not from us.” (2 Corinthians 4:7)

My sadness comes from the realisation that I am a jar of clay, and one which is breaking a little more each day, but I can also be thankful for the treasure which God has placed inside.  My calling to be a priest continues of course, irrespective of whether I am working in the church or retired.  Perhaps God may yet have some things for me to do, broken as I am.

I retire from ministry on 30th November, but my calling carries on.

Posted by Benny Hazlehurst at 09:45