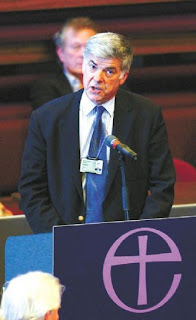 This morning I was interviewed on TV with Chris Sugden, from Anglican Mainstream.

It was a bewildering experience. While the main action was taking place in a studio in London, I was alone in studio 100 miles away surrounded by remote control TV cameras, trying to take part in a debate with people I couldn’t see! It was definitely a learning experience.

But what bewildered me more was Chris Sugden’s assertion that Government plans to give permission for Civil Partnerships to take place in religious buildings was nothing more than intimidation. He implied that it was part of a co-ordinated campaign against the Church, (I assume he meant the Church of England) which was designed to coerce and intimidate.

While I found the surroundings I was in strange, I found his accusation mind-blowing. How can ‘permission’ be ‘intimidation’?

The fact is that there are many same-sex couples who would love to have a spiritual element to their Civil Partnership, but this is currently prohibited by law in the UK. There are also numerous churches (and other religious groups) who would love to offer Civil Partnership in the context of a religious service of blessing, but are similarly prohibited by law.

Last year, Lord Ali introduced an amendment to the Equalities Bill which would remove this prohibition by giving permission for religious buildings to be used and religious content included. The amendment was supported in a public letter by no less than 7 Bishops and many leading church people, and was passed by the House of Lords.

What the Government is doing now, is acting on this democratic vote to give such permission to those who seek it. This is the very opposite of intimidation, and will not force any church or anyone to act against their faith.

Yet clearly Chris Sugden and Anglican Mainstream feel intimidated by this permission. Why?

Whatever the reason, their attempts to prevent those who want to include their faith in their most important relationship, and to prevent churches from meeting those spiritual aspirations, are both morally indefensible and spiritually repressive.

Jesus had a saying for this kind of approach – “You shut the door of the kingdom of heaven in people’s faces. You yourselves do not enter, nor will you let those enter who are trying to.” Matthew 23:13

I think the taxi driver who took me to the studio had the right question.

He was white, male, heterosexual, married, down to earth working class in his 50’s, and he said “What is their problem?”
Posted by Benny Hazlehurst at 19:55 6 comments: 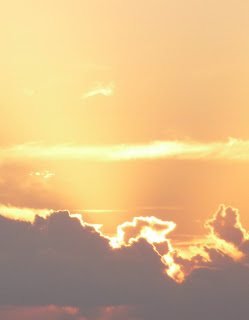 After the near despair of my last few blogs, I am pleased to be able to post something more positive this week.
Few had high hopes for the recent Anglican Primates Meeting.  Several Archbishops boycotted the meeting, and there were others who were unable to come for various reasons.  The press were kept well away from proceedings, and more than a few commentators wondered if it would be worth all the time, energy and expense which such meetings consume.
By half way through, it appeared to be every bit the anti-climax which many were predicting, with seemingly endless discussions on what it means to be a Primate, and what role these meetings should have in the future.  It seemed to many, including me, to be a supreme exercise in ecclesiastical navel-gazing!
And yet there were some surprises on the way.
First and foremost, at the end of the meeting, the Primates who attended, actually seemed to have enjoyed meeting together - in stark contrast to recent meetings.  There were smiles, and descriptions of a meeting 'filled with grace'.  There was a Eucharist in which everyone participated fully.  There was a press conference which summed up the spirit of the week rather than briefing and counter briefing by different pressure groups.
And equally hopeful were the range of statements made at the end, including messages condemning violence against homosexuals, calling for action on climate change, and the end to systemic violence against women and children around the world.
No - it wasn't earth-shattering.  No - it won't re-chart the course of the Anglican Communion in 5 days, but it did mark the re-emergence of that intangible and yet vital Christian quality of 'fellowship'.
I had very low expectations of the meeting, but the Archbishop of Canterbury has been shown to be right in pressing on and giving his fellow Primates the time and space to meet without having to 'put the church to rights' all in one go.  His patience, forbearance, and the courage not to grasp the nettles have been proved to be exactly what the Communion needs at this time.  One can only hope and pray that the 'bonds of affection' which have been re-kindled in Dublin will be allowed to grow.
There are those, of course who have poured scorn on the meeting - not surpisingly, such negative comments have come from those who refused to attend.  Many clergy will recognise this phenomenon - the frozen bitterness of those who have decided that they must leave a church because they don't like the direction it is taking.  In their minds, the church remains frozen at the moment of their departure, locked in time and space in the midst of the issue that prompted their decision to go.  But churches do move on, often with a new creativity emerging after the pain of division - it is just that those who have absented themselves can't see it, simply because they are not there.
Their absence and bitterness should not be allowed to hold the church back from moving forward and discerning the paths of God - because, as the Archbishops in Dublin have shown us, the first rays of a new dawn will warm the hearts of those who remain.
Posted by Benny Hazlehurst at 08:30 1 comment: 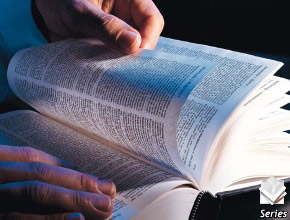 I have struggled over the last few days with whether to post a link to this blog by The Satirical Christian.  It is a re-working of John chapter 8 where a woman who has been caught in adultery is brought to Jesus for judgment.
On the one hand, it is highly relevant to events in Uganda in recent times, and shows how easily the Gospel can be re-written in our own image.  On the other hand, it is not fair to single out the Church in Uganda in this way, as all of us have the capacity to use our cultural prejudices to re-form our image of God and the Gospel - often without realising it.
However, as The Satirical Christian says "Satire is always unfair, but that is why it gets under your skin and makes you think about issues in a different way".
So here is it, and I hope that it will act a catalyst, not just for our thoughts about Uganda, but also for our own reflection and self-examination, lest we find ourselves falling into the same trap.
http://thesatiricalchristian.blogspot.com/2011/01/gospel-according-to-uganda.html
One day when Jesus was teaching in the Temple, the teachers of the Law brought in a man caught in adultery.
They made him appear in the national newspapers and said to Jesus, "Teacher, this man was caught in the act of adultery, and we would like the law to demand that we should stone such men.  Now what do you say?"
They were using this question as a trap, in order to have a basis for accusing him.
But Jesus bent down and started to write in the ground with his finger.  When they kept on questioning him, he straightened up and said to them, "If any one of you is without sin, let him be the first to throw a stone."
Again he stooped down and wrote on the ground.
At this, those who heard began to go away one at a time, until one of them turned and said, "But Teacher, he was caught with another man."
Then Jesus replied  "Why didn't you say that in the first place?  Stone him - straight away, and go looking for others who have done the same thing, so that they may be 'outed' in Rolling Stone  too!"
"And when you take their funerals, remind their friends why they have been stoned, and tell them how he brought it upon himself, and how evil they all are!
"For I tell you, every sin and blasphemy will be forgiven men, but the blasphemy of being Gay will not be forgiven. Anyone who speaks a word against the Son of Man will be forgiven, but anyone who dares to be homosexual will not be forgiven, either in this age or in the age to come."
And the teachers of the Law congratulated Jesus on passing their test, for confirming all their prejudices, and giving them an excuse not to consider the sin of their own hearts.
And Jesus said, "Then neither do I condemn you - go now, and be self-righteous in your sin."
Posted by Benny Hazlehurst at 10:18 4 comments: