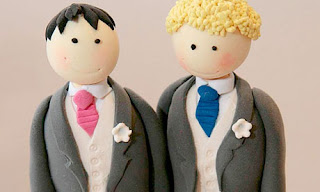 Today is the day when the House of Commons will vote on same-sex Marriage.

The Equal Marriage Bill comes to parliament for its second reading with a free vote for MP's on whether it proceeds to the next stage.  All the calculations show that the vote will be 'Yes' but that hasn't stopped those who are vehemently opposed to same-sex marriage fighting to stop it.

In this blog, I have written on this numerous times, so rather than we-write something which is not new, I thought it would be better if I simply created a list of the most appropriate posts.

Here we go...
It is almost certain that today's vote be won convincingly - but that doesn't mean the arguments will end there.  What is needed is a calm look at the heart of marriage - I hope this helps.
Posted by Benny Hazlehurst at 08:34 2 comments: