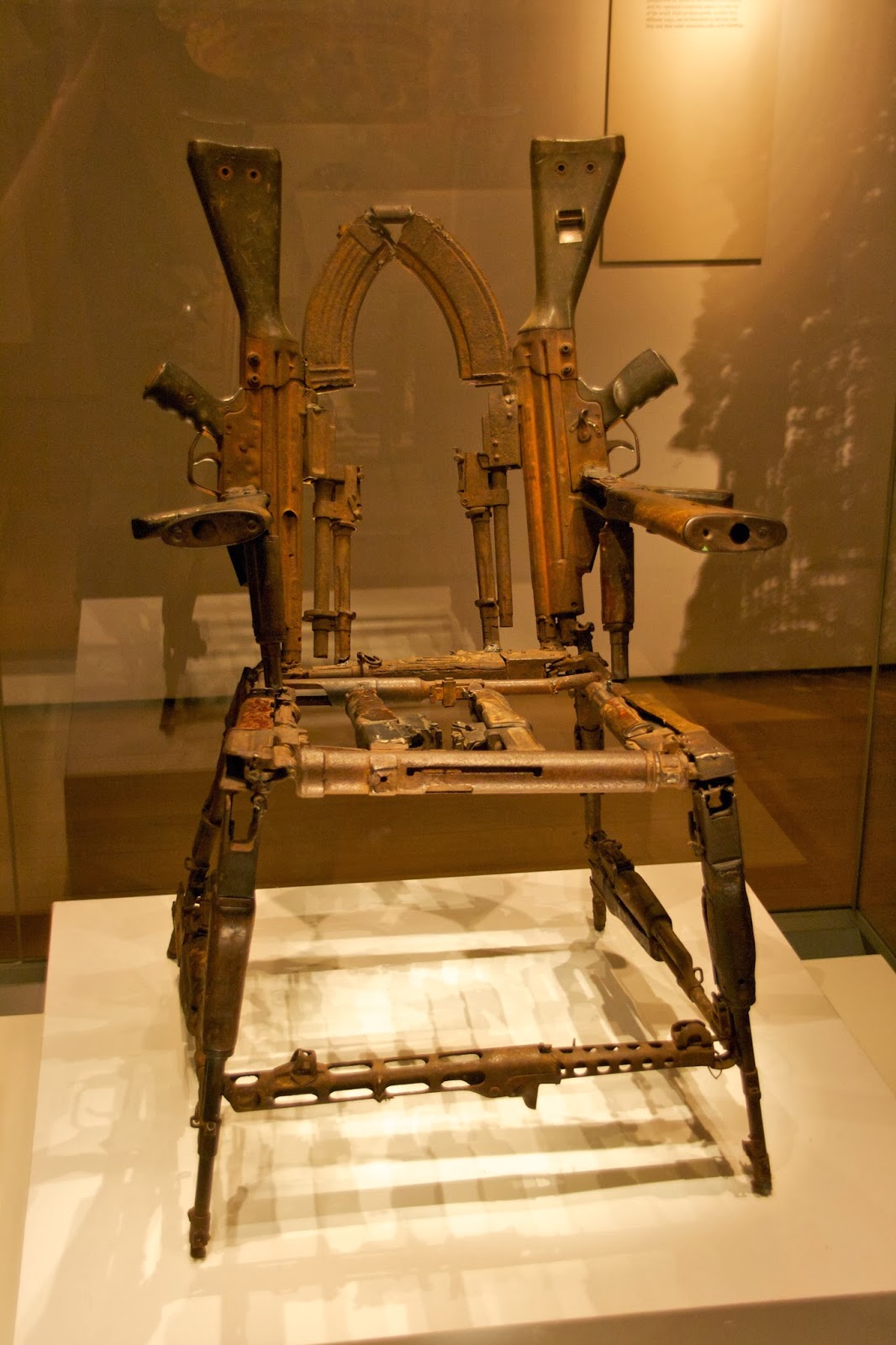 I visited the British Museum yesterday.  I was in London with a bit of time to spare and walked up the steps of the imposing building with no clear idea of what I wanted to see.
As I looked at the Museum map, I saw an exhibition area which I had never noticed before – the Africa exhibition, down in the basement, tucked away.
With all the recent controversy about anti-gay laws in Nigeria and Uganda, it seemed right to go and learn something about this vast continent and I made my way down the stairs.
Small though the exhibition was (in comparison to the huge exhibitions of antiquity) I didn’t get to see everything.  Looking at the exhibits and reading about their history & meaning was an illuminating experience, and I will go back when I next have the chance.
But there were two exhibits which I found particularly powerful.  Both were modern, not ancient, and both were created to provoke thought and discussion about modern Africa.  Both came to this county with support from Christian Aid.
The first was the ‘Throne of Weapons’ from Mozambique (pictured above).  It is a chair made entirely of decommissioned weapons from the civil war in Mozambique and the sight of it made me shudder.  Constructed of AK-47 assault rifles, Heckler and Koch G3’s, and a variety of other deadly weapons, it has been exhibited in schools, churches and cathedrals.  It is said that the ‘gothic arch’ which dominates the back of the chair was designed to symbolise a church.
I tried to imagine sitting on such a chair – an object constructed from so much death and violence.  I could not.  Over 1 million people died in Mozambique’s civil war as arms flooded into the county, paid for by South Africa and the Soviet Union. How many others have died in conflicts elsewhere in a continent which is so often torn apart by bloody conflict? 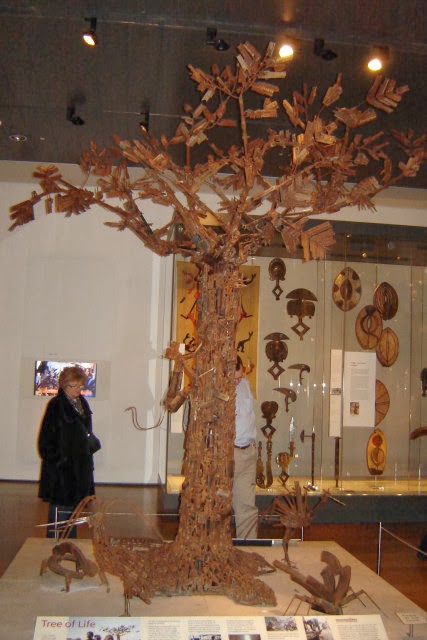 The second exhibit was similar, yet remarkably different.  It was also made from decommissioned weapons from the same county, but here the guns which made up the sculpture did not dominate in the same way as the Throne.  They were somehow subsumed into the overall design.  Where the chair (a particular symbol of authority in Africa) screams weapons and violence, the Tree of Life exudes hope as the weapons fade into the background, overwhelmed by this symbol of life and transformation.  Just as nature has reclaimed the barren no-man’s-land between the trenches of the First World War, so this Tree speaks of the reclamation of life from death.
The tree was commissioned by the British Museum and Christian Aid following the profound impact which the Throne of Weapons made in this country.  The guns had been surrendered in exchange for tools after the Civil War – an initiative by Bishop Dinis Sengulane which saw over 600,000 guns put beyond use.
But where did the weapons come from?  Portugal, North Korea, Germany, Czechoslovakia, Poland, Germany, Britain, the Soviet Union, South Africa & Rhodesia (as it was then) all played a part in the supply of arms to warring factions, fuelling the cycle of violence, suffering and hatred which held Mozambique in its grip for 15 years – a cycle which is reproduced in many other African countries to this day.  From the child soldiers of the Lord’s Resistance Army to the genocide in Rwanda, to the chaos of the DRC and renewed conflict in Sudan, Africa is often a violent place, but it is outside powers which supply the means of war.
This caused me to reflect on the recent exchange of letters between Archbishops about new laws which are coming into force against LGBT people in a number of African countries. I was one of those who signed a petition to our Archbishops calling on them to speak out against the Anglican Church’s support for new draconian laws in Nigeria, and I was pleased when they wrote to all Anglican Primates to remind them of the need to express love and pastoral care to LGBT people, whatever the church’s theological stance.
The response from Kenya, and Uganda has been defiant, as has GAFCON's response to the recent College of Bishops meeting on sexuality.  Dodging the issue of prison sentences for homosexuals, they shoot straight back with a warning to the CofE about making any changes which would be more accommodating to same-sex couples in church.
I was struck by both the mild terms in which York and Canterbury phrased their letter and equally struck by the strength of defiance in the African replies.
So what should we do when people’s human rights are being violated, and we hear of suffering and injustice being meted out to LGBT people simply because of who they love.  In Nigeria this now extends to prison sentences of up to 14 years for being married to someone of the same-sex, or 10 years for being a member of an LGBT organisation.  In a country which faces its own internal tensions between the predominantly Christian south and the predominantly Muslim north, hatred of LGBT people is one of the few things that both communities agree on.  LGBT people are being used as scapegoats by some, and as a focus of unifying suspicion by others.
Perhaps we should ‘up the ante’, writing stronger and more forceful letters of condemnation? Perhaps we should encourage direct action?  There is evidence that the Christian communities in Uganda, Nigeria and Kenya are being fuelled in their prejudice by hate preachers from the USA.  They are certainly being encouraged and financed by more conservative Anglicans from the developed world who would like to see schism or ecclesiastical civil war in the Anglican Communion.  Indeed there are suggestions that this week’s responses from Uganda and Kenya, were actually written thousands of miles away in the USA or Australia rather than by the Archbishops themselves.  If so, it would not be the first time this has happened.  How can we balance up the scales?
However, if the Throne of Weapons can teach us anything, it is that pouring fuel onto the flames of African conflict and injustice is not the answer.  We have to find another way.
As Jesus walked the dusty roads of the Holy Land, he too was immersed in a culture with its tensions and its injustices.  There were those who would have liked him to take up the fight against the occupying Romans army, by using his popularity to inspire revolution.  In the end it is arguable that the crowd called for Barabbas because Jesus had not fulfilled this expectation, and equally that Pilate handed him over to be crucified only after extracting an oath of loyalty from the crowd, “We have no king but Caesar!”
Jesus was no push-over and was always ready to challenge the status quo, but time and again he refused to fuel the fires of conflict.  His chosen path was to bring healing, not pain – to encourage people to love, not hate – to offer grace rather than condemnation.
In the same way, we cannot stand by in the face of injustice and violence in Africa – but rather than fuelling the fires of an ecclesiastical arms race, we need to find ways to be more Christ-like in our response, not less.
Whatever the difficulties, we need to create a Tree of Life – not a Throne of Weapons.
Posted by Benny Hazlehurst at 15:28 2 comments: