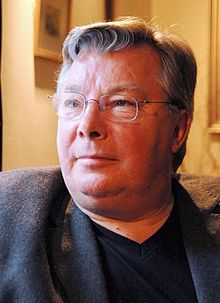 “There was a 30% breakup of Partnerships with gays last year - and it only became law recently!!!”   Gerald Coates, 19th March 2013.
This direct quote comes from my Facebook page yesterday where Charismatic church leader Gerald Coates launched an unnuanced attack on anyone who would dare to suggest that same-sex partnerships can be anything but sinful.


His views and opinions on same-sex relationships are of course his own - and he has a right to hold them – but what particularly disturbed me was the blatant untruth of this statistical claim.
It is not just Gerald Coates who makes such claims.  I have heard similar ones from a number of traditionalist Evangelical clergy and ministers.  For some people who hear them, they have been repeated so often that they must be true!  And it doesn’t help when well known Evangelical church leaders like Gerald Coates repeat them with such force.


So what is the truth about Civil Partnerships and rates of dissolution?
Below is a summary of the available statistics from the ONS (Office for National Statistics) who provide official government statistics on a whole host of areas of public life.  Please feel free to follow the links to see the source documents.

So perhaps the year on year statistics show a higher rate of break-up?  Not atall.
In the period 2005-2010 (the first 5 years of Civil Partnerships) 42,778 Civil Partnerships were registered.  But during this same period only 1,007 ended in dissolution.  That is a break up rate over 5 years of 2.35%, making Civil Partnerships much more successful than marriage where long term statistics indicate that 42% of marriages are expected to end in divorce.


If we add the 2011 figures to this, we find that by the end of 2011, 49,572 Civil Partnerships had been registered and 1,679 had ended in dissolution.  That makes a cumulative break-up rate of 3.38% - a long way short of the 30% that Gerald Coates and others have claimed.
All of the above shows that in the short time since Civil Partnerships have been lawful in England and Wales, rates of dissolution are far below the rate of divorce.

But what of the longer term?

Divorce rates are measured over much longer time period and the rate of Civil Partnerships which end in dissolution is increasing.  Perhaps in the longer term, that will show that Civil Partnerships are less stable than married relationships?
Or perhaps not…


The ONS have spent a lot of time analysing marriage and divorce trends and have concluded that just over 15% of marriages end in divorce during the first 6 years – compared with 3.38% of Civil Partnerships during the first 6 years – again showing that CP’s have been much more successful than marriage at keeping people together in their first 6 years. (Population Trends - The proportion of marriages ending in divorce  - Table 3)
Furthermore, there are countries which have had the equivalent of Civil Partnerships for much longer that the UK.  What do their statistics show?


Denmark was the first country to introduce registration for same-sex partnerships – back in 1989 – providing over 20 years of statistical data to analyse.
Their experience has been that Civil Partnerships are much more robust and long lasting than heterosexual marriages.  I am grateful to Dr John Pike in Bristol for researching this and for the following conclusions:

So whichever way we look at it, Gerald Coates’ claim of a 30% break-up rate is a blatant untruth.  Not only that, but the evidence from this country and others with far longer experience, is that Civil Partnerships are much more successful that heterosexual Marriages in helping two people to stay together.
Jesus said, ‘If you hold to my teaching, you are really my disciples. Then you will know the truth, and the truth will set you free’ – that is my prayer for Gerald Coates today.

Gerald Coates has clarified/retracted his claim yesterday about Civil Partnerships.

He has written on my Fb page today commenting, "My 30% was taken out of context - it came from an article in the press at the end of last year - noting that 'last year' [ 2011] there had been a 30% rise in dissilusions. (The eqiuvalent of divorce as I am sure you know.) I wasn't making a big deal of it."

So everyone can see if it was taken out of context, I include a screen clipping below of his Fb comment from yesterday... and I will leave others to judge whether the 3 exclamation marks he used are making a big deal of it or not. 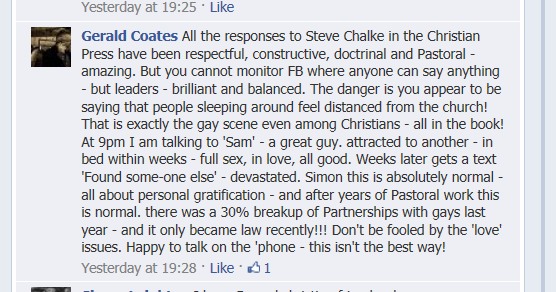 Posted by Benny Hazlehurst at 06:30