We pray for their return ... 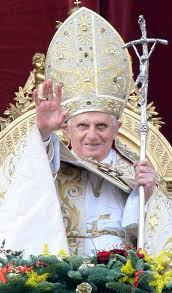 So yesterday the Church Of England lost 5 Bishops as they make the journey to Rome over the issue of women Bishops...

Some may find it tempting to say "Good riddance" but that would graceless. Instead I would like to tell the story of an young Anglican Priest who left the Church of England back in 1963 to become a Roman Catholic .

He did it for theological reasons.

He was an Anglo-catholic, trained at St Stephen's House in Oxford, under Fr Arthur Couratin. And he, along with others, felt that the Church of England was in danger of betraying its Catholic heritage by moving towards unity with the Methodist Church. In doing so, any claim to Apostolic Succession would be broken and we would have priests & ministers who had not been properly ordained. In short, the Church of England would cease to be part of the' one holy catholic and apostolic church' of the creeds.

And so he left, with his wife and young baby, following the courage of their convictions.

They left their home for a room in a Roman Catholic house for defecting Anglican clergy. They received a warm and practical welcome in the Roman church, with the Converts Aid Society helping him to get a job and home to live in, and Roman Catholic priests helped them through this momentous time of change in their lives.

At that time, their Anglican baptism was not accepted in Rome, so they had to be conditionally baptised and confirmed again - and of course, as a married man, there was no possibility of being able to move to ordained ministry as a Roman Catholic priest.

So he became a teacher, initially in Roman Catholic schools, but then in a state school in Rochdale. When he got there however, he discovered something - that the Head and Deputy Head at this school were both dedicated Methodists and the Deputy was a Methodist lay preacher.

During his time there, he began to question his attitude towards Methodists and his reasons for leaving the Church of England. These Methodists were among the finest Christian he had ever met, and as a result he realised that he had been wrong. In that realisation, he felt God calling him back and he went to the Bishop who had sponsored him for ordination him to ask to be allowed back into Anglican ministry. Graciously, the Bishop welcomed him back, and there followed another 28 years of ordained ministry before retirement.

This story is not unique by any means, but it is special to me because that Anglican priest is my father, and I was the young baby in their arms as they left their Vicarage to 'go to Rome'.

Its point is to show that sometimes we can be wrong. Sometimes there are issues which seem so fundamental to our faith, that lead us to difficult decisions and drastic action. Yet in the fullness of time we realise they are mere distractions to the call to love God and our neighbour in the footsteps of Jesus Christ.

Paul knew this of course, after his momentous change of life and faith on the road to Damascus. In Philippians 3, he lists all the things that he thought were so important before his encounter with Christ - and then he says that now he counts them all as loss compared with the all surpassing greatness of knowing Christ. Not many of us will have a Damascus experience to redirect our lives, but we do meet Christ in other people every day and if we are open to see Christ in them, we too can find Christ calling us to new understanding of His work in the world.

Of course things are very different now. The issue of the day is Women Bishops, not Methodists. Anglican priests can go to Rome and be welcomed into ministry, even if they are married with a family. And now there is the promise of an Anglican Ordinariate within the Roman Catholic Church.

Now, with the resignation of five Bishops to join the new Ordinariate, there will be other clergy who are tempted to join them. My hope is that they will think twice before leaving the Church of England on such an issue - but my prayer is that even if they go, they will remain open to seeing Christ at work in the ministry of others, and through seeing Christ at work, they will one day feel the call to return.

Posted by Benny Hazlehurst at 10:05