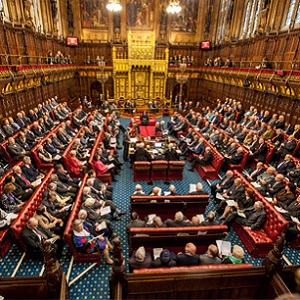 The same-sex marriage bill is being discussed by the House of Lords.


This evening, the Lords will vote, not just on the Bill, but also on a ‘wrecking amendment’ from Lord Dear who has called the proposals ‘ill-considered’ and ‘too serious a matter to be hurried through on a whim and in a cavalier fashion’.


Yet this is arguably the most democratic Bill to go through the House of Commons in years.


Not only were MP’s given a free vote at both its readings, but it has been passed by a large majority at both stages, despite the chief opposition to the Bill coming from the government’s own backbenchers.
Compare this to the usual day to day operation of Parliament on controversial legislation.  MP’s are corralled by their Party Whips into voting according to party instructions, irrespective of their own views or opinions.  Political posturing takes place on all sides of the House, and the debates seem to have more to do with party political points-scoring than with the issues under consideration.


In contrast, the Marriage (Same-Sex Couples) Bill has gone to the House of Lords with support from all sides of the House of Commons, having had a largely principled debate on each occasion, and a 2/3rds majority in favour.
This is democracy at work as opposed to politics, and the Lords would do well to remember that as they prepare to vote.  To send it back to the drawing board or reject the Bill would be to reject the clear non-partisan vote of MP’s.


Sadly, there is a precedent for such a democratic debacle in recent months – the General Synod’s vote on women Bishops.  After vote after vote in favour of women bishops – after 42 out of 44 Church of England Dioceses voted for women Bishops – after 74% of General Synod Members voted for women bishops – the legislation was still lost by just 2 votes in the House of Laity as it failed to get a 2/3rds majority in that House. (see ‘Reflections on a Broken Democracy’).
The House of Lords would do well to remember the ridicule, incredulity, and outrage which greeted that Church of England vote.  Although the vocal minority got their way and prevented equality reaching the House of Bishops, the reputation of the Church of England suffered yet another crippling body blow.


If the Equal Marriage Bill is rejected by the Lords after such a clear democratic majority in the House of Commons, it will not help its precarious position as the unelected House in our Parliament.  Like the Church of England, it would risk being seen as anachronistic, reactionary and out of touch.
Alternatively, the Lords could embrace the democratic vote of MP’s and reject the vocal minority who still believe they have the right to dictate to the majority.


Democracy comes from hearing the voice of the majority, whereas politics is the exertion of power by those with the loudest voice.  Let’s not confuse the two.
Posted by Benny Hazlehurst at 06:00 3 comments: