A tale of two Ugandans 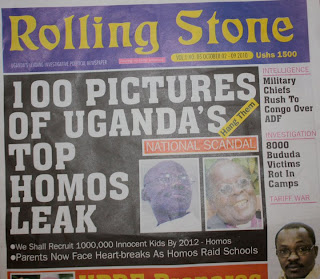 This week Uganda has been in the gay rights news once again, with the murder of leading homosexual David Kato in an attack my unknown assailants who beat him to death with an iron bar.
Such murders are, sadly, not uncommon in Uganda, but what makes this murder such a cause for concern is the fact that David Kato was one of over 100 homosexuals whose names and photographs appeared in Uganda's Rolling Stone Newspaper with the words "Hang them".  Following the article, many of those who were 'outed' have suffered attacks, and received death threats.
David Kato had recently won a court case against the newspaper preventing them from naming more homosexuals, and there is clear suspicion that his death may be linked to his sexuality.  Last year Uganda faced unparalleled international pressure when a bill was introduced in parliament which would have introduced the death penalty for homosexual acts.   The publication of names and photos of homosexual came soon after the withdrawal of the bill and many read it as encouragement for Ugandans to take the law into their own hands.
While the circumstances of his murder are still to be determined, messages of concern over his death have come from almost every quarter, including US President Barack Obama & Secretary of State, Hillary Clinton.

Also this week, another leading Ugandan made a stand on the issue of homosexuality, but in a very different way.
Archbishop Orombi of Uganda, is one of the leading figures in the Global South Group opposed to same-sex blessings, ministry and marriage.  In 2006, he led the Ugandan Bishops in unanimously declaring that they would boycott meetings where "the violators of Lambeth Resolution 1:10 are also invited"
Lambeth 1:10 describes homosexual practice as 'incompatible with Holy Scripture' and true to his word, he was one of 7 Archbishops who have boycotted the Anglican Primates meeting this week in Dublin because of the presence of The Presiding Bishop of the Episcopal Church in the United States, Dr Katharine Jefferts Schori.
But Lambeth 1:10 also states "We commit ourselves to listen to the experience of homosexual persons and we wish to assure them that they are loved by God" and calls on "all our people to minister pastorally and sensitively to all irrespective of sexual orientation and to condemn irrational fear of homosexuals"
Now, surely, is the time for Archbishop Orombi to put the whole of Lambeth 1:10 into practice.
In  an article for the Anglican Communion in 2007, he notes that Uganda is the second largest province in the Anglican Communion, with over 9 million members.   He extols the benefits which the Gospel has brought to Uganda saying, "The gospel of Jesus Christ as revealed to us through the Word of God enables warring tribes to begin to coexist and to embrace neighbourliness."
He praises evangelists who "Instead of being armed with spears, they came armed only with the Word of God. Instead of a message of war and destruction, they delivered a message of Good News from the God and Father of our Lord Jesus Christ."
The time has surely come when this voice needs to be heard again in Uganda - with the Church acting as bringer of peace - to end to the tribalism of sexuality and to promote love and respect for all human life.
And the time has come for Archbishop Orombi to recognise the importance of fulfilling the whole of Lambeth 1:10, by using his influence in Uganda to stop the demonization of homosexuals.
Nor would he be a lone voice in Uganda in calling for a new dialogue.  The influential Ugandan newspaper 'The Daily Monitor' has responded to the murder by calling for a new national debate.
What we need is an honest national dialogue on homosexuality in order to forge a consensus on the rights of those Ugandans who choose to be gay and those who oppose homosexuality as a lifestyle.
Holding puritanical and extreme views on the matter, whether liberal or conservative, will divide us, rather than help us find a mutually acceptable compromise.
People like David Kato and others who might be gay are Ugandans and enjoy the same rights and protections of the law as heterosexuals. We cannot send them into exile neither, lock them away, or hang them.
We need to have an honest discussion about how to ensure that their rights are upheld without violating the rights of other Ugandans.
Any Anglican province which does not take on Lambeth's call to "condemn irrational fear" and assure all homosexuals "that they are loved by God" could be described (in the words of Archbishop Orombi) as a 'violator of Lambeth 1:10'
And no-one would want the Archbishop of Uganda to have to boycott himself...

(Please also see my follow-up post 'Today I am ashamed to be an Anglican' which followed the Funeral of David Kato)
Posted by Benny Hazlehurst at 13:08